A Home for Your Bots

I've been planning this issue for a while now, but have found myself rather busy as of late. Either way, it's here.

If you would like to leave comments, you can do so on this Mastodon thread.

For a lot of us accustomed to the modern internet, bots are generally considered a bad thing.

Whenever I open up Discord, I have a bunch of bots DMing me with ethereum scams. If I want to play a round of Team Fortress 2, I find that the public servers are flooded with bots which run various scripts designed by trolls to make the game as unplayable as possible. On Twitter and Facebook, various organizations have taken to creating bot accounts in order to astroturf in favor their respective agendas.

And on the Fediverse, small businesses will often hire ad agencies to create countless spam accounts to promote their product, requiring instance moderators to either be hypervigilant or watch as their community is overrun with garbage.

But at the same time, it doesn't have to be that way. Bots can be useful, they can be funny, and they can help deliver information in new ways on platforms like Twitter and Mastodon.

To give an example, the @American__Voter account on Twitter consists of automated posts, each giving a profile of a voter in the United States 2016 presidential election and their views on various policy issues. Scrolling through this data which would otherwise be rather inconvenient to individually search out, it gives us a sense of how the average person's policy stances might be more idiosyncratic and less aligned with their political identity than has been conventionally assumed.

Whether or not you care much for the topic, the important thing here is the presentation of information in a format that's easily discoverable, digestible, and shareable to convey a message in a fashion which encourages the audience to look through the data and verify the conclusion themselves. This says a lot about how bots can shape microblogging as a communication medium, and expand its potential.

botsin.space is a Mastodon instance (to learn what instances are, watch this short video) which allows users to run their own bots in an environment designed around just that. Other instances may often may often take issue with bot users, as they tend to fill up the feed with automated posts, drowning out other users; this could result in an unexpected ban or running up against instance-wide rate limits. And even barring all that, it may be possible that your own bot is drowned out by actual spam-bots, leaving you back at square one. By having an instance dedicated to running bots, not only do you have a better experience on the platform, but so do other instance owners who are given the option to federate with or block an instance which caters to bots. 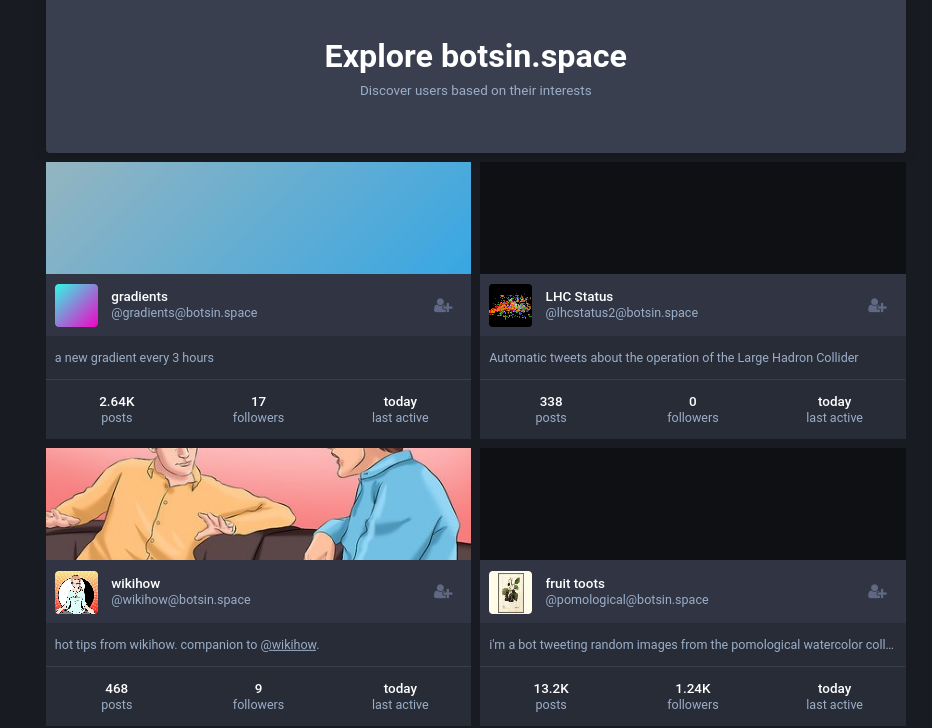 Some additional things to note: 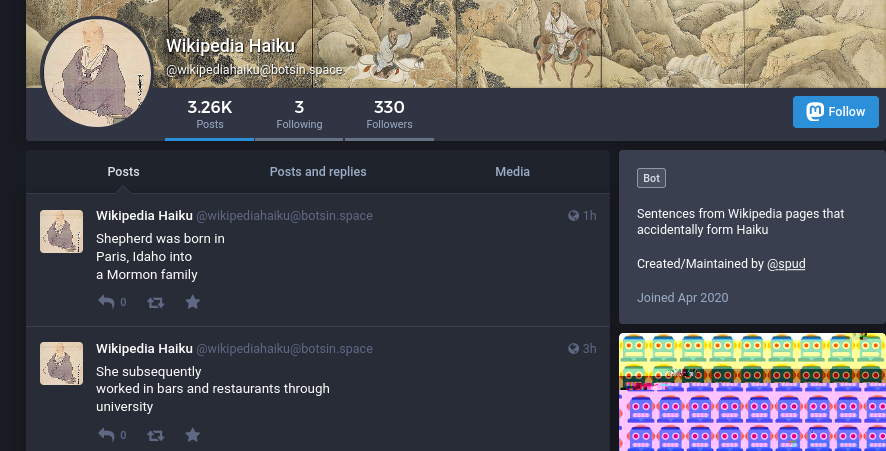 To get you started, here's some bots on the instance I thought were cool:

@proverbs – A bot which dispenses the wisdom of a neural network.

@wikipediahaiku – A bot which makes haikus out of the text of random Wikipedia articles.

@whatthecommit – A bot which posts out of context commit messages.

Interview with the Administrator:

Have you ever made any bots, and if so, could you tell me more?

I've made lots of bots! My earliest bots are on Twitter. The main one there that is most popular is probably @wayback_exe but my personal favorites were @botgle, which was a multiplayer version of Boggle that ran for a few years, and @earthroverbot which was a bot that simulated a trip across the US using google street view data.

I've made a couple of fedi bots. My first bot here was @loveletter@botsin.space which is a recreation of an old program that generated love letters

I ported over @ARealRiver@botsin.space from Twitter — this is a bot that portrays a river meandering through your timeline in emoji. I also made a bot that toots out stills from the November Rain video during the month of November — @NovemberRain@botsin.space as well as a bot that pretends to be a yule log fireplace at the end of the year — @YuleLogBot@botsin.space and at some point I had a bot that ran an ELIZA simulation — @eliza@botsin.space — but I need to get it running again.

What does the routine for moderation look like? Do you have any advice or tips for other instance owners?

Currently I'm able to handle all the moderation. I try to be as proactive and responsive as possible. Most of my moderation requests are for accounts on the server although some are against other instances. My main recommendation is to make a clear terms of service for your instance and do the best you can to stick to it. I'd also generally recommend that running an invite-only instance is a really good idea — there's a lot of spammers out there.

What are some of your favorite bots on the instance?

It's an incomplete list, but here's some of my current faves:

Given that the instance is majority bots, do you still feel a sense of community?

The server itself might not have a real obvious sense of community, but I definitely feel like there's a strong community of bot makers, and I've made a bunch of friends in that world. Back on Twitter there was a community of botmakers that used the #botALLY hashtag to organize, and many of those folks are now on the fediverse.