Shorts From a Webcomic Artist

Note: Some of the posts are NSFW (not pornographic, however), these posts are tagged, so pay attention to tags if that is an issue

I apologize for the brief hiatus, I'm juggling a lot of projects right now. You can see what else I'm working on right now, I'm working on compiling and journaling all my projects onto my personal blog. If you'd like to contact me regarding Copyleft Curator or something else, I do have a Mastodon.

Onto the issue itself, this time I wanted to check out something of a different medium, so I spent some time scrolling through the federated PixelFed timeline. A lot of good stuff here and there, but Reinder's work definitely stuck out.

Reinder is an internet cartoonist known for continuously working on the webcomic known as Rogues of Clywd-Rhan for the past 28 years alongside various other series which can be found on his site.

On PixelFed, however, he uploads various sketches and one-off panels of his, mixing traditional and digital techniques. 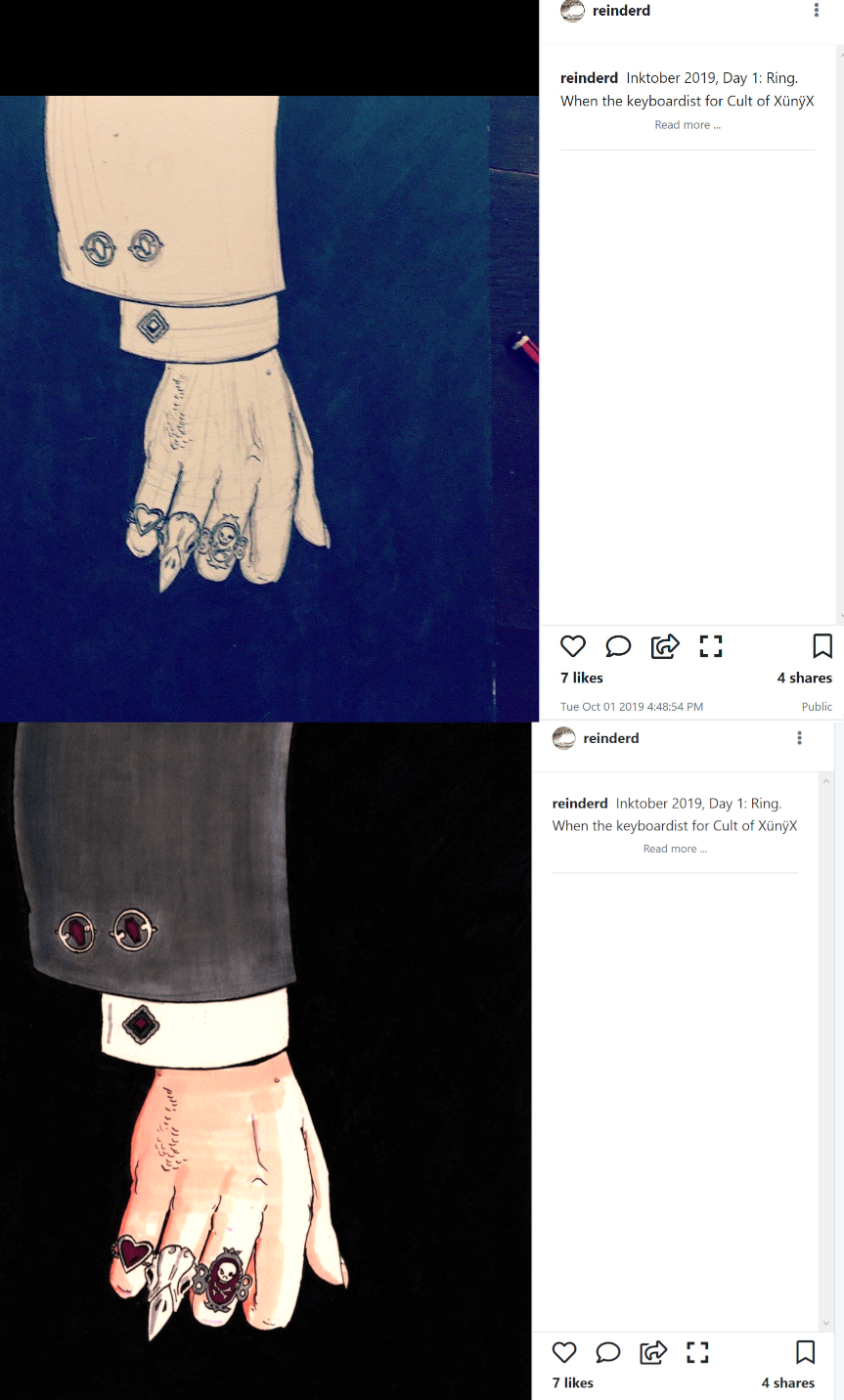 1. Could you break down your process of making comic strips, whether it be the writing, the planning or the sketching?

In terms of writing and planning, my process varies per title. The Lives of X!Gloop isn't planned at all, by design, because I want to stretch or even break the rules of storytelling in it. Rogues of Clwyd-Rhan is planned only in a broad sense, but since I haven't done substantial work on it in a few years, it's maybe not a great one to talk about. Spun Off and AbÃºi's Travels have more of a roadmap that's in my head than a detailed plan and are written page by page. I really shouldn't do this; whenever I have sat down and written a story in full, with revisions before drawing it, the results have been a lot better. But I don't seem to be able to discipline myself into doing that. I blame brain issues, because self-medicating helps a bit. My newer project, “Cultish Manners” is one that I'm working on in advance a little more. One way I do that is by dedicating most of my Inktober this year to scenes that I want to happen in that story and its sequels; ultimately I want that comic to be like a recent Doctor Who season where themes from the early episodes recur in the final ones. As for drawing, I typically just pencil the whole either digitally or traditionally, then do inks digitally followed by flats in the color scheme the page should have overall, then shades and highlights, then word text and word balloons, in that order. Lately, to help me solidify things a little more, I've started typing up the words during the thumbnailing phase, so the dialog is at least more fixed. That goes into the transcripts that I now put up on the website and I hope it helps ease me into a process where things are planned in advance a little more, for all of the titles.

2. Could you talk more about your experience participating in Inktober? Any challenges you've faced, what you've gained out of it so far?

I try to do drawing challenges year-round, but Inktober is the big one for me because it's one that so many people take part in. It's the same way I approach running: I run all year but train a little more extensively for the 4-Mile event in my home town that has 10,000 people taking part. I did Inktober for the first time in 2017 using characters from a comic I was then considering and without the official prompts, but abandoned it after about 7 drawings. The biggest challenge for me is that October is a busy period in my day job, as well as the time of year where it becomes harder to work in daylight, so scheduling around these factors is the hardest. But it's also the area where I have the most to gain, because my executive function isn't great, so it's good for me to have a regular way to say “I'll do this at that time of day, and if that doesn't work, I'll do this other thing instead. For example, if I don't get my inks done and drying up by 9 AM when I have to leave for work, I can use a different tool that doesn't take so long to dry, or I can take the penciled art with me and work on it during my lunch break, or in extreme cases I can ink or even do the whole piece digitally. That decision-making process has been broken for me for a long time, but this year it's finally gotten better. I also try to be more flexible about what I draw on any given day. If an idea in my head is too complex, I may be better off drawing a thumbnail and leaving that for later, or if a prompt doesn't work for me on that day, instead of beating myself up trying to come up with something, I can go to a different prompt or no prompt. That prevents tunnel vision and because I don't do this for a living, I don't have to stick to a specific plan at any time. I'm privileged to be able to do that.

3. You've done this for quite a long time, not just drawing but also interacting with the online community even from the early days. How has the internet helped you grow as a creator?

“The internet” as a large and amorphous thing hasn't done much for me, on the whole, other than providing an endless source of reference. What helps me grow has been communities of people, on any platform. Those can be traditional social media, forums, federated social media or chat rooms; I'm not picky about that. In fact, I get a lot of encouragement from knowing that three of my co-workers who I see every day are also doing Inktober. Having said that, the places where I get the most energy and inspiration have been a small Discord server of other artists, and mastodon.art where I follow the Inktober2019 hashtag and see people putting out great stuff every day. There's a good balance on Mastodon.art where there is on the one hand a community that will encourage and validate you, but for me, I can also be a bit competitive with them and channel my envy of other people's greater technical skills in a healthy, positive way. When I was getting started with webcomics, the part where you engage and communicate with others was much more stigmatized. People I talked to would not recognise interacting with other artists, and with the audience, as part of the job of publishing art online. But it's important for me to share my work widely, to know what people like and where the people are who like it, and to talk to people about what I'm doing – for validation more than critique if I'm honest. I can critique myself pretty well.

4. Webcomics often require a lot of dedication, which is often what kills off a ton of them. What keeps you going even when you don't feel like continuing?

You know, I don't know if the way I do things counts as 'keeping going' because I produce like about six pages per comic per year and it's bothering me a lot that this is so. I do have a lot of dedication and will to continue, but I have a hard time keeping focus on any one thing and almost no uninterrupted free time to speak of. It's not as bad as a few years ago when I came close to begging my spouse not to refer to me as any kind of artist, because I wasn't doing much art. For her to announce me as an artist, and indeed as someone obsessed with creating art, to strangers made me feel like a fraud, because if any of them were to ask me 'so where's the art?', I wouldn't have a really good answer to that. It's gotten better as I got some of my executive function back from its absolute low of a year and a half ago. But it's still a struggle. Drawing art in bite-sized chunks helps, which is why I do art challenges all the time. If I can finish a piece over the course of a day by taking 15 minutes in the morning when everyone else is asleep, 15 at lunchtime and maybe 30 in the evening, that makes me feel like I've accomplished something. But it's not a great way to make a comic. When there's an idea in my head, even if it's just about how to do a thing that I'd been working on before, it excites me and takes up all the room in my brain. I need to get it out and I get really unpleasant if I have no opportunity to catch it. So that drives me, just having an inner need to do it. It's not always fun to have a day job in the way of being creative. But on the other hand, it's also been a blessing that I don't have to do this for a living, and that I've never had any real success at it. When artists become successful with something, there's a risk that they will then have to keep doing the same thing over and over again, and I've never had to deal with that. If something becomes too repetitive, I do something else instead.

In addition to the featured account, Reinder can also be found on Mastodon, his own website, and Patreon if you'd wish to support him directly.